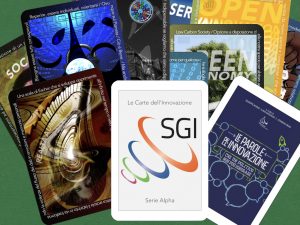 Stati Generali dell’Innovazione aims at acting as a “multiplier of social innovation”, with the main goal of promoting opportunities of discussion and generative dialogue regarding the agenda of Country / Region innovation. To such an objective, one of the utilized tools is the #scopriamolecarte format, envisaging ‘playing’ with a deck of special cards: the Innovation Cards. Each of them is generated starting from one of the “words of (responsible) innovation”, displaying a projective image and an evocative phrase capable of stimulating critical thoughts on a single concept relevant to the innovation world. Each card constitutes an augmented reality access door to other images, sensations, thoughts, … come out from the minds and hearts of the people who participated in the generative dialogue of the “coaching circles” (U.Lab MIT, “Leading to the emerging future”). Those were carried out in recent months to explore, from different angles and points of views, concepts considered extremely relevant to the future of our Countries, soliciting participants emotions and imagination, and trying to get out of the ‘already known’, by combining the principles and methods of Open Space Technology and Theory U.

The specificity of the generative dialogue is being (i) systemic, (ii) focused on listening to oneself and others, and (iii) rhythmic and fast, aiming to bring out something new with respect to one’s own positions on the subject dealt with. Each session of generative dialogue (“co-creation”) is preceded by an introductory report by “case givers” (or keynote speakers), who help to build frames of reference from the sociological, economic and environmental point of view, providing elements and inspirations for the subsequent dialogic reflection, where the  innovation cards help stimulating emotions and imagination.

With the #scopriamolecarte format, Stati Generali dell’Innovazione addresses the ambitious goal of developing, in a participatory and creative way with a systemic logic, a vision of the desirable future in some crucial areas of personal and collective life — work, governance, learning, resources, health, … . It is a co-design process that aims at providing institutional decision-makers with stimuli and proposals in their fields of responsibility, strengthening the role of Stati Generali dell’Innovazione as a world-class think-tank at the service of innovation at large in a systemic perspective.

The collaborative work conclusions constitute the starting point for a (never-ending) proposal of Innovation Agenda for our Countries, to undergo further moments of generative assessment and (once finalized) disseminated as a concrete proposal of strategic direction to influencers and those who take political, economic, social, educational decisions.

Thus, through the original #scopriamolecarte format of the Innovation Cards, Stati Generali dell’Innovazione continues efforts on promoting participatory building of a knowledge infrastructure facilitating synergies and value creation starting from two relevant common assets: responsible research and the ability to innovate. In particular, thanks to the on going generative dialogue, we keep on collaborating on drafting the Italian / EU Innovation Agenda, with emphasis on the major social issues relevant to economic development — sustainable growth and responsible (open) innovation.